There has been plenty of grist for the dance media mill this week, as one of hip-hop’s most outspoken and controversial figureheads crossed over into the dance music realm, igniting a feud with one of our own most noted trolls. While the feud between deadmau5 and Kanye West could be viewed as centered around the ethics of pirating and intellectual copyright, in truth it’s offered a thin excuse for two notorious hotheads to throw Twitter grenades at each other. 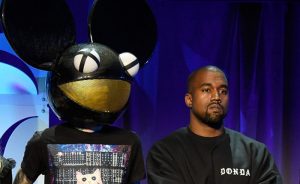 Kanye West has of late supplemented the largely gushing reviews for his new Life of Pablo album with Twitter controversy of the most explosive kind, notoriously revealing he was $53 million in debt and asking Facebook CEO Mark Zuckerberg for assistance to the value of $1 billion, in the same breath insisting that sites like Pitchfork “not comment on black music anymore” after suffering what he supposedly considered to be a harsh 9/10 review.

West’s music has arguably been situated largely in the electronic realm since he helped kickstart the EDM revolution with “Stronger” back in 2007. However, it was like he intentionally picked a fight with the dance community when he revealed via a tweeted screenshot that he had been pirating digital synthesizer plugin Serum—which, as it happens, is brought to the world by Xfer Records, a music technology company cofounded by none other than deadmau5.

“What the fuck @kanyewest … Can’t afford serum? Dick,” was deadmau5’s swift response on Twitter, followed by the sarcastic suggestion that a Kickstarter could be launched to help the hip-hop star afford Serum, complete with a sharp-tongued #prayforyeezy hashtag. West eventually responded with his own flurry of tweets, throwing shade on deadmau5.

# whose job is it to carry the head on the plane # hash tag # do you check the mickey mouse head or carry on # does it get hot?

# I’m bored ### when you get married will your wife have a giant minnie mouse head? # This brightened up my day… thank you dead-mow-five

True to form, deadmau5 eventually hit back at West with a harsh yet hilarious string of tweets, calling him a “bigger fuckin clown than anyone I know.”

Imma let you finish…. But you should probably be saving the money for a 4th grade education. https://t.co/1yqBoIg1Z1

@kanyewest perform at your own daughters parties. You’re a bigger fuckin clown than anyone I know.

No shit. All I’m seeing is a shit attempt to derail it. https://t.co/UDmcU9AvsU

While it’s all consistent with Kanye West’s messy Twitter tirades of late that have featured heavily in the media, the willingness of deadmau5 to join the stoush shows he hasn’t stepped down from his own tendency to enter heated online arguments.

It’s in spite of a particularly heated end to 2015 for deadmau5, which saw him first deactivating his social network profiles, before eventually coming clean on his battles with depression that was presumably linked to the heated online skirmishes he’d been drawn into.

“Like many other human beings, I’ve been dealing with some depression issues that I don’t need to go into detail with,” he said in a detailed statement last December. “I’d consider myself far from emotionally stable, though not unstable enough [not] to know support when I see it… Once again, sorry for being a dick to those who are fans and supporters.”