When UK dancefloor veterans the Chemical Brothers returned with their new album Born in the Echoes last year, it featured a typically impressive cast of guest vocalists. While its debut single “Go” featured Q-Tip returning for another collaboration, their new single “Wide Open” sees them partnering with fellow ‘90s survivor Beck. While the song already proved itself to be a sleeper indie-dance hit, a new video has just been released that features some fairly impressive special-FX work, with a dancer undergoing an eye-popping transformation as she performs. 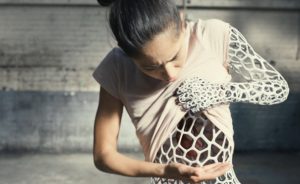 According to a statement from dom&nic, the production house that produced the video, its vision “was to merge the mechanical and organic, having been inspired by procedural cellular structures; their VFX Team created a full CG model of the dancer… comprising of 107 individual anatomic rigs to allow the seamless transformation which happens during the dance.”