Trance trio Above & Beyond are currently making their way across the US on a different kind of tour, a series of unplugged and intimate performances where they showcase their laser-kissed back catalog in a different light. It’s to accompany Acoustic II, the sequel to their 2014 album that proved a surprising success, and it’s due to land in June. 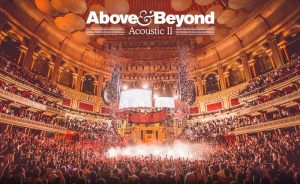 “After many months of work at Abbey Road, Bob Bradley’s studio in Leeds and our home base in South London, our second collection of acoustic reworks is finished,” the trio said in a statement, announcing the album’s arrival Friday, June 3.

Accoustic II is currently available for preorder, and they’ve also just unveiled three of the album’s songs to sate the appetite of fans in the lead-up.